​​Chief among them is a pair of reliefs by Pablo Callejo titled Temptation (2017). Displayed horizontally on the ground and framed in wood, the reliefs are large—approximately five feet high, about four feet across and over a foot deep. Made from gypsum, gesso, oil and resin on a wood base, they feature a glistening, jewel-toned and textured surface that resembles water; especially from a short distance. Two naked figures seem to be rising from the swirling substance, one female and one male. With eyes closed, both seem to be comfortably lying in their own spaces. There is an expression of calm confidence on the woman’s face. With her right arm across her torso, she offers a shining red apple to her companion who languidly extends his right arm to reach for it across the space between them. It is an arresting work, with dark undertones, and a mythic narrative that, in recalling the biblical temptation of Adam, becomes universal and timeless, while also, perhaps, striking a contemporary chord in suggesting sexual temptations and transgressions." 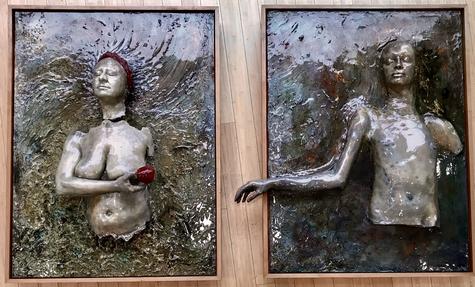 ​​Critic Claudia Rousseau's, Ph.D., Comments:  "The annual exhibition of work by faculty and staff of the Department of Visual and Performing Arts, Montgomery College (Takoma Park-Silver Spring Campus) is now on view in the spacious and light-filled King Street Gallery in the Morris and Gwendolyn Cafritz Foundation Arts Center in Silver Spring.  The work exhibited this year is of an exceptionally high quality overall, with a few standout pieces that merit special attention.

​Juror Christopher Butler's Comments:  "All of Pablo's three paintings made my heart jump and it was so difficult to choose between them. In the end, I chose the one depicting himself as the Fool. It's beautifully and imaginatively painted (I love the costume) but above all, it really shows how the Fool's journey has become his own journey. Making the Tarot a personal journey is ultimately what it's about for me more than anything else and that's why his work won me over, aside from the obvious technical merit."